The Burn of a Thousand Suns
​The Forgotten Ones Book Two 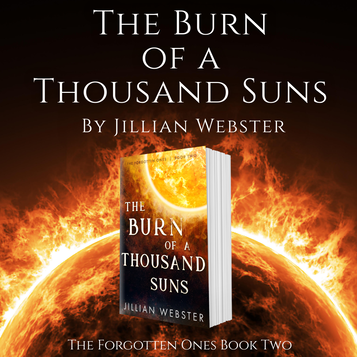 ​After her near-death experience in the middle of the Pacific Ocean, Maia has finally accepted who she is—or has she? New and terrifying nightmares have begun, reminding her that along with the good may come an ocean of bad. There is a darkness lurking within...

Arriving in the drowned streets of LA, a strange and dangerous world awaits Maia and Lucas, and they have no time to spare. Thousands of miles sprawl between them and the city of Leucothea in The Old Arctic Circle, filled with deadlands, vicious mobs, and erratic weather. From the relentless heat of the Californian desert to a merciless Arctic sun that never sets, the journey will test them in ways they could never have imagined.

But nothing could prepare Maia for the shocking chain of events that await. Walking an unraveling tightrope between worlds, she will be thrust upon a crossroad of the most gut-wrenching kind—one that no matter which direction she chooses, she may lose everything she holds dear, including Leucothea, forever.

The second book in The Forgotten Ones trilogy, The Burn of a Thousand Suns continues Maia’s haunting journey as she battles her way towards The Old Arctic Circle.